One of the things I love about London is its markets, both covered and open air. Street markets

Streets like Petticoat Lane near Whitechapel become a market from Mondays to Fridays, where people can buy food, clothes, and shoes at low prices. Carnaby Street, near Piccadilly, is a pedestrian thoroughfare which became the mecca of fashion in the 1960s. It has become almost a shopping and dining district in itself, covering 14 streets in the West End.

There are many other street markets, like Maltby Street (in South-East London, opens Sat.-Sun), Berwick Street (in Soho), East Street Market(East St, South London), Church Street, Leather Lane (open Mon. – Fri. from 10 am to 2 pm and it’s a 2-minute walk from Farringdon and Chancery Lane stations), or Columbia Road Flower Market, open on Sundays. Visitors can take advantage of the low prices and try taditional dishes from around the world.

Of course, there are covered markets as well. Most of the buildings we see today are Victorian. Although they are recent –relatively speaking! – there has been commercial activity in those sites for many centuries.

The commercial activity at London markets is not confined to the covered market but has spilled out into the adjacent streets.

One example is Camden Market, which started off as a small arts and crafts market in the 1970s and it now occupies the whole neighborhood. Actually, there are five markets in total in Camden Borough. With over 1,000 shops and stalls, bars and restaurants, Camden is a fun -albeit exhausting- place to browse, shop, eat and, most importantly, kill it on Instagram.

Covent Garden is, in my opinion, the polar opposite of Camden.  It’s elegant and refined, with lots of history and culture behind it. There are 13 theatres in the area including the Royal Opera House. Look out for the free walking tours that start at Covent Garden Piazza daily.

You can read more about Covent Garden in this post.

Hands down, my favourite market is Borough Market in Southwark. The variety of foods to choose from seems endless. I love the iron and brick style of construction, it reminds me of a railway station – Victorian, of course. Besides, one my favorite restaurants in London is there too.

Smithfield Market, located in the Square Mile, is the UK’s biggest wholesale meat market. Smithfield has a long and interesting history. Tournaments and executions were held here, like that of Scottish hero William Wallace.

Smithfield is a working market so if you want to see it in full swing, it’s best if you get there at 7 am. I’ve never been there that early! Even if the stalls close, you can still see the building inside. If you’re in the area, don’t miss St. Bartholomew’s church, a medieval gem tucked away behind an archway. 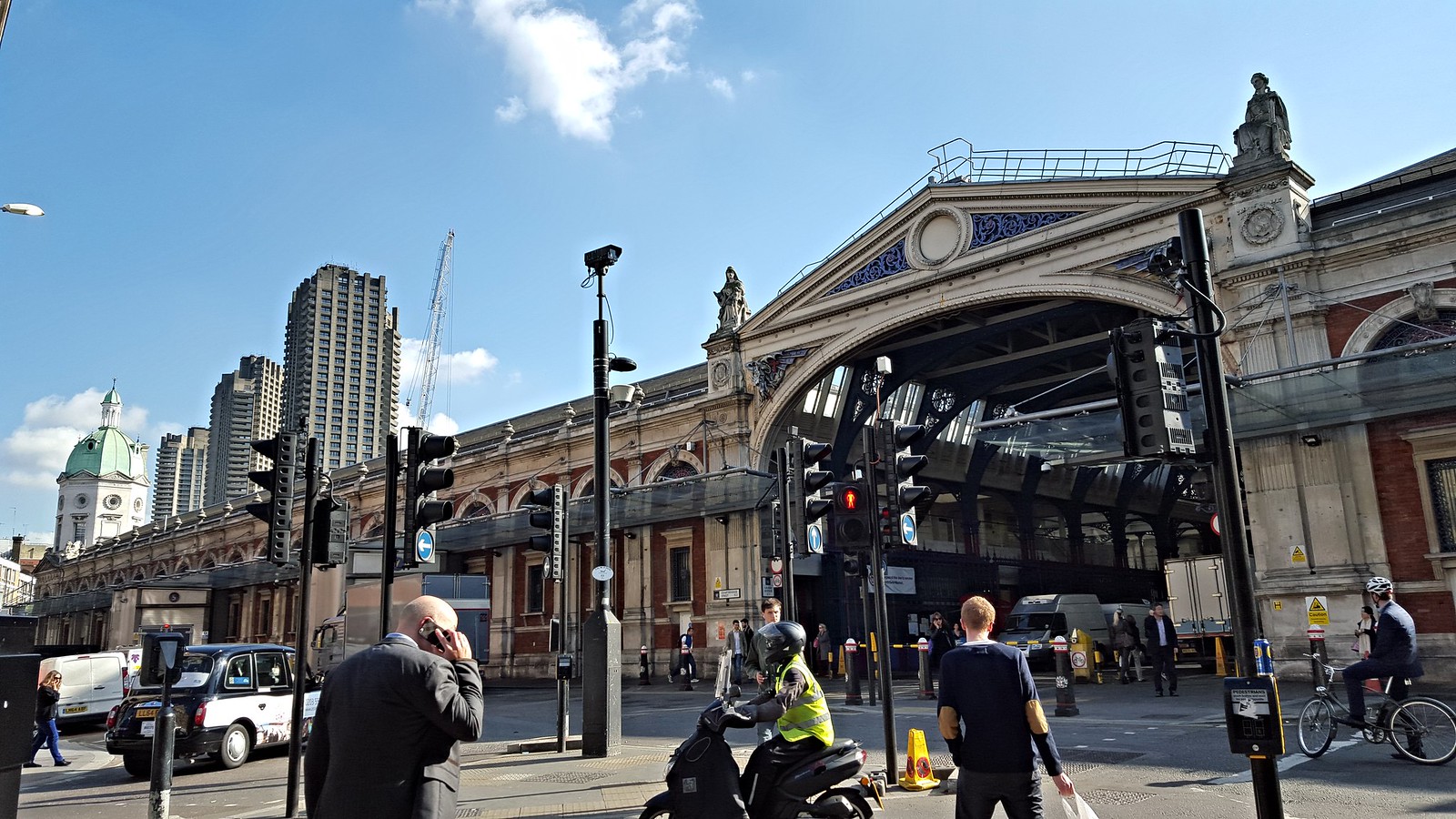 Leadenhall Market is a must-see in the City of London. Located in the heart of what once was Roman London, there has been a market on this site since then. The Victorian building, with its wrought iron and glass structure,  is  beautiful. Leadenhall  Market  appeared  as the Diagon Alley in Harry Potter. 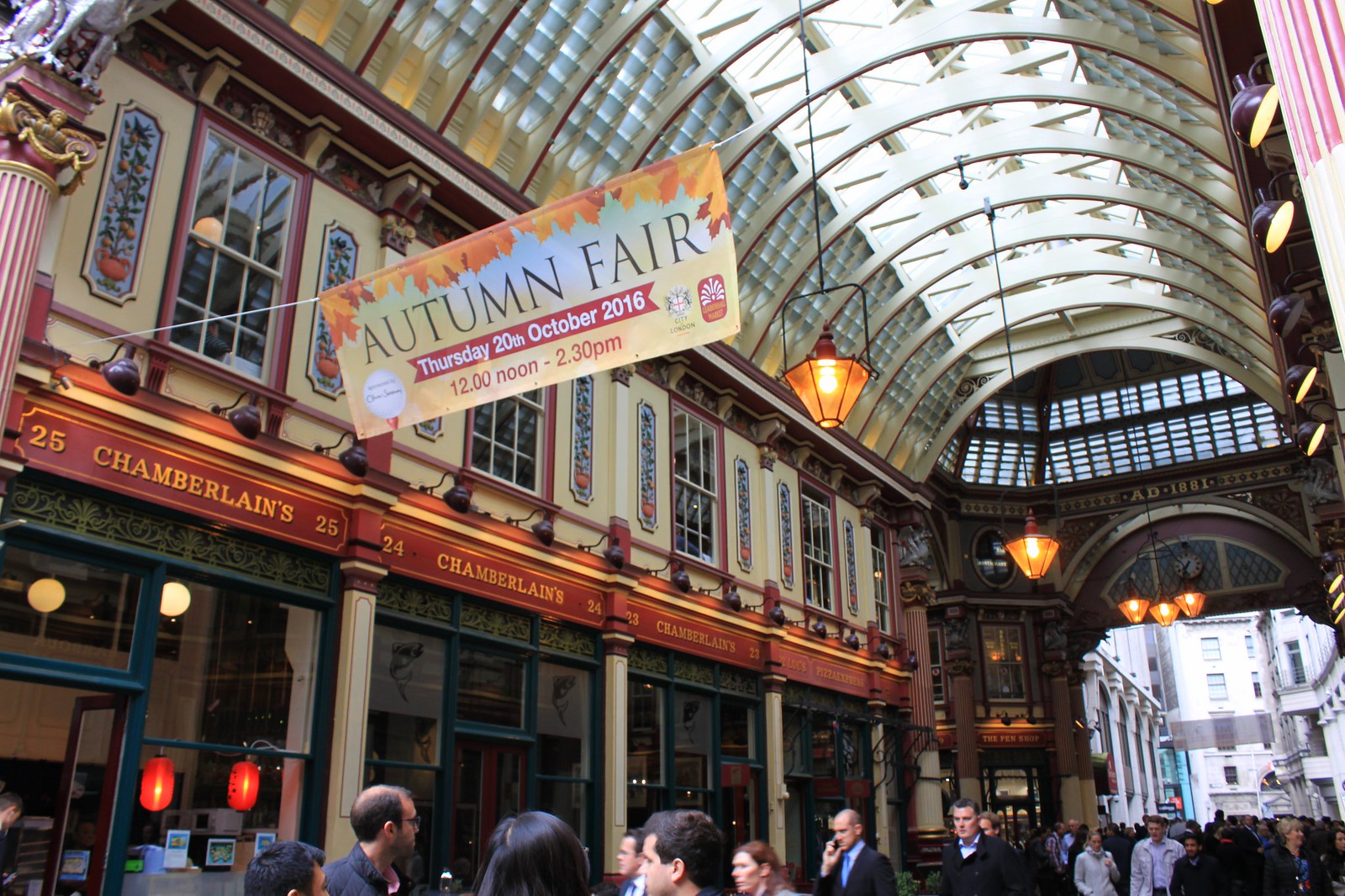 Old Spitalfields Market has been a food market since 1638. Nowadays, you can buy arts and crafts from all over and sample all kinds of traditional foods of other cultures. It’s a good place to find bargains and one-of-a-kind presents seven days a week. We recently had lunch at Spitalfields. I liked the look of the outdoor food stalls, especially the Argentinean empanadas and steak sandwiches (yup, I‘m totally biased) but it was too cold and there was no seating. The indoor market it was.

I had a superb panino from the Calabrese stand and Sean had a curried paneer and chicken wrap.  While I was waiting for my panino, the lovely stallholder fed me samples of cheeses and Parma ham while the Turk next door handed out bits of decadent baklava. Bliss!

UPDATE: The market’s layout has changed since then. Those stalls have gone, and there are new ones. There’s more seating areas as well.

Market Hall Victoria is a pretty little food hall right across from Victoria Station (191 Victoria Street, Victoria London, SW1E 5NE). It has 11 kitchens (Italian, Asian, British, you name it) and three bars. It also has a rooftop, but unfortunately it was closed due to inclement weather the day I went. I loved the converted Victorian building, which has so many original features still. By the way, I had a delightful plate of house-made pasta from the Italian stall, Nonna Tonda.

I do recommend visiting any or all of these London markets for a truly fantastic food experience.